If you read a lot of gardening blogs and books, you may have heard the term herbaceous plant. You may have thought herbaceous was just a fancy way of saying herbs, like the kind you cook with. But herbaceous plants are something different than rosemary and thyme! They’re a group of plants that have soft stems instead of the hard, woody ones that trees and bushes have. Because many herbs like rosemary, thyme, and sage have woody stems, they don’t make the cut and can’t be considered herbaceous! Isn’t that funny?

But a lot of other plants do fall under this pretty broad classification. Everything from agaves to peonies to potatoes is herbaceous plants because of their soft stems. If you want to learn more about this broad category of plants, then keep reading!

What is a Herbaceous Plant?

Herbaceous plants are vascular plants, which means that they have a vascular system. It’s similar to the one humans have and transports water around the plant. All herbaceous plants also have soft, fleshy stems—not the woody ones that are found on shrubs and trees. Most flowers, vegetables, and houseplants are herbaceous.

We’ll teach you all about herbaceous perennials, biennials, and annuals later in the post. But right now, we’re going to answer the question you’re all probably wondering—are your beloved succulent plants herbaceous?

Most succulents have soft, fleshy stems, so they fit the definition of herbaceous plants! Even cacti with their tough outer skin are considered herbaceous. With that being said, not every succulent is herbaceous.

The Joshua Tree, for example, is a massive tree from the agave family that can grow to be 40 feet tall. It has a super thick, woody stem just like any other tree. You probably can’t call it an herbaceous plant like other members of the agave family!

The same could probably be said about jade plants. They’re miniature, treelike succulents that have thick, woody stems. They’re probably not herbaceous because they’re a lot like bonsai trees, but they sure are cute! If you want to learn more about jade plants, you should check out the article we wrote about them!

What are Herbaceous Perennials?

One thing that many, but not all, herbaceous perennials have in common is that they die back during the winter. Some herbaceous perennials can’t handle the cold. As a result, all of their aboveground growth, including their flowers and leaves, dies during fall when the weather gets cold. Surprisingly, though, their roots can stay healthy and intact underground. Check out how to take care of your succulents during the winter season in “How to Care for Succulents in the Winter“.

During the warmer months of the year, perennials store energy so that their roots can survive during the winter. It’s similar to how squirrels store nuts for the winter and then go into hibernation. Even though the rest of the plant is dead, the roots can go dormant and survive underground because they have a stockpile of nutrients and insulation from the cold. Once the weather warms up, and spring comes back again, these plants can sprout new growth because their roots survived the winter. Isn’t that incredible?

As we mentioned above, though, not all herbaceous plants are perennials. Some of them are annuals that only survive for one growing season or biennials that survive for two.

Some succulents prefer certain seasons over others, check out “Summer & Winter Succulents: What’s the Difference?” for more info.

What are Herbaceous Biennials and Annuals?

Herbaceous biennials and annuals are kind of like monocarpic succulents. After they grow and produce seeds, they wither and die. It takes annuals just one growing season to reach maturity, flower, and produce seeds that can become brand new plants. It takes biennials a little longer—two growing seasons total. Unlike perennials, biennials and annuals devote most of their energy to flowering rather than surviving during the winter, which is why they have such short lifespans.

Planting annuals in your garden can be a hassle because you have to dig them up each year. But many people still do it because they have gorgeous blooms! Their blooms are generally bigger and prettier than the flowers perennials produce because they devote so much energy to flowering. Annuals also have longer blooming periods than perennials. Their blooming period lasts from spring until just before the first frost of the year. We don’t plant annuals in our garden because we prefer succulents, but they sure do sound like they’re worth the extra maintenance! Learn to water your succulents correctly with our exclusive ebook called “The Correct Way to Water Succulents“. Check it out!

Some common annual flowers you’ve probably heard of are geraniums, snapdragons, and petunias. Many fruits and vegetables are also annuals, including peppers, potatoes, and delicious purslane!

Biennials require a little less maintenance because they last for two growing seasons. Some common biennials you’ve probably heard of include carrots, pansies, and foxgloves.

BE SURE TO ALSO READ:

Well, there you have it! That is absolutely everything we know about herbaceous plants. We hope that this post demystified the term for you so you can understand gardening blogs and books a little bit better.

Did this article help answer your succulent-care questions? We sure hope so! If not, no worries. Succulent City is devoted to aiding all succulent lovers, and that’s why we created a line of ebook guides! Check out our in-depth tips on “The Best Soil Recommendations for Your Succulent” or even “The Most Common Issues Amongst Succulent Growers”  today! 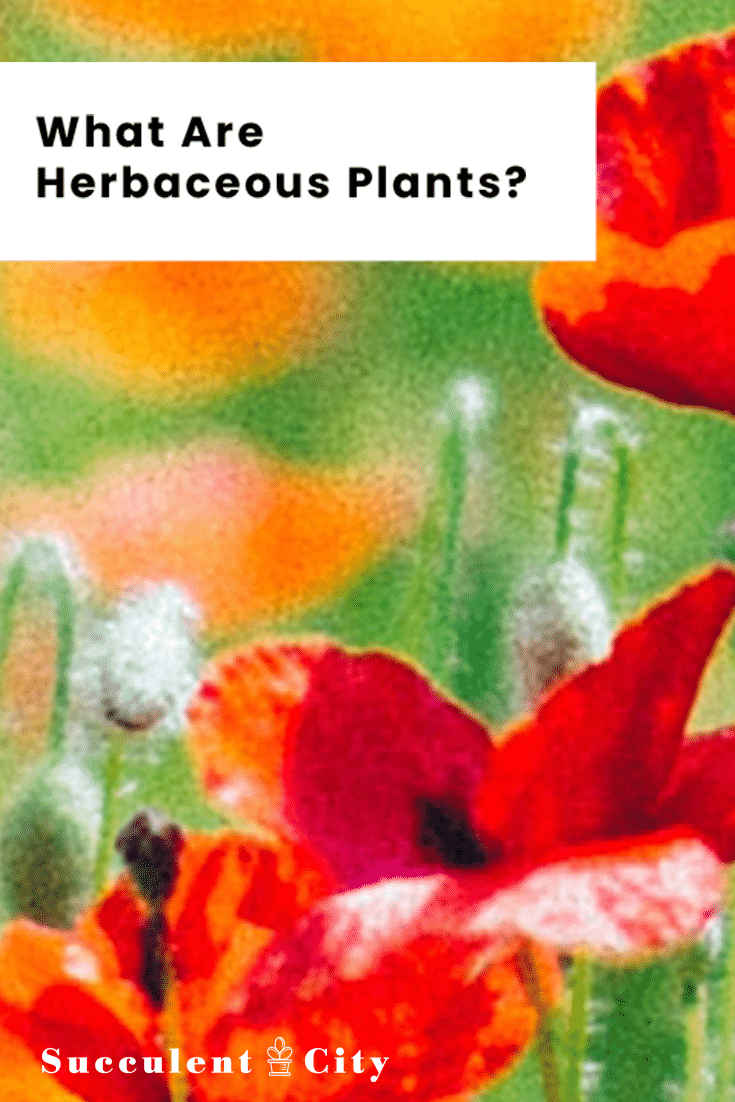