Cacti are beautiful plants. I mean that’s why you have a few of them around, right? We’re guilty of it for sure…

But with this good look, comes the grueling task of having to deal with the thorns, or rather spines as they’re usually referred to in botanical circles. Yes, they may add to the beauty of these plants (with a variety of colors and sizes). But what if they were a bit, say, tender?

Well, if the spines existed for the sole purpose of sitting around your home just maybe that would have been possible. But we all know where they were really meant to be – out there in mostly dry environments braving the harshest of conditions.

And these spines play a huge role in this coping. They’re an adaptation that has ensured the survival of cacti out there in places where a majority of floral is non-existent.

These thorns range from the long and blatantly don’t-mess-with-us types to the small, fine and yet vicious glochids. Despite this, their functions are more or less the same.

Purpose of Thorns on Cactus Plant

Shade by day insulation by night

A thing with desert temperatures is that they’re always swinging to the extremes – day and night.

During the day, temperatures are sky high with the shining sun. As the day wears off and the sun disappears in the opposite direction, a downward spiral in readings kicks in resulting in very cold nights.

Now, these aren’t very nice fluctuations for any living thing out there. And that’s where thorns save the day for cacti.

A known fact: there is very little vegetation in the desert. But you know what?

Still, there is a considerable number of herbivores that need food in the same desert. They need vegetation to keep going. And water, of course.

Cacti would have been great sources for both of the above. Only that they would have been extinct by now, maybe. Most of these animals wouldn’t dare touch the cacti. So, definitely they have their thorns to thank for that.

Well, it’s true that some desert animals still have a way around the spines and do manage to get a bite (pack rats, bighorn sheep, desert tortoise etc). But it’s also true that the sharp thorns have kept away lots of others from munching the cactuses out of existence. I mean seriously, would you ever want to munch on something like a cactus, talk about very painful dental visit.

Cacti are light-loving by nature. Each part has to get plenty of it for the plants to grow accordingly.

But sometimes this is not possible largely due to the style of growth of some. For instance, shrubby ones. Light is going to reach just a few stems. Well, that’s if the cactus plant was just a smooth-stemmed structure. But bless the thorns –they split up light, evenly distributing it around the whole plant.

In fog-prevalent deserts, thorns are quite instrumental in quenching the plant. They trap enough of this fog to turn it into water droplets that later find their way down around the base of the plant.

With the shallow root system common in cacti, the water is quickly absorbed by the plant. And the cacti live on.

As mentioned above, thorns trap air around cacti that is pivotal in the survival of the plant two major ways. Insulation is one. The other is water preservation.

The thin film of air reduces the rate of evaporation of water from the plant. As a result, very little of this water is lost to the atmosphere. In a desert setting, this is a huge deal.

Certainly not all. Especially not the large ones.

Glochids are the ones that serve this purpose perfectly in some cacti plants like Cholla.

The glochids are tiny, numerous and get easily (and firmly) attached to a passing body due to their barbed shafts. That way, segments of the plant are carried from the parent to some other place where they form new plants upon being dropped.

That’s how these thorns have helped cacti survive in the wild. The thorns could be pointless now, you know, with all the care these plants get as houseplants. But their prickly parts are not going away anytime soon.

Who knows, maybe they will as they spend more time in pots. But, that will definitely take a lot of years.

If you’d like this read you’re going to love our full in-depth ebooks! With so many of our succulent lovers asking for more, we listened and can’t wait to share it with you here! With our very detailed ebooks, you’ll get more information than these short articles, some ebooks are 30+ pages, perfect for a weekend read. 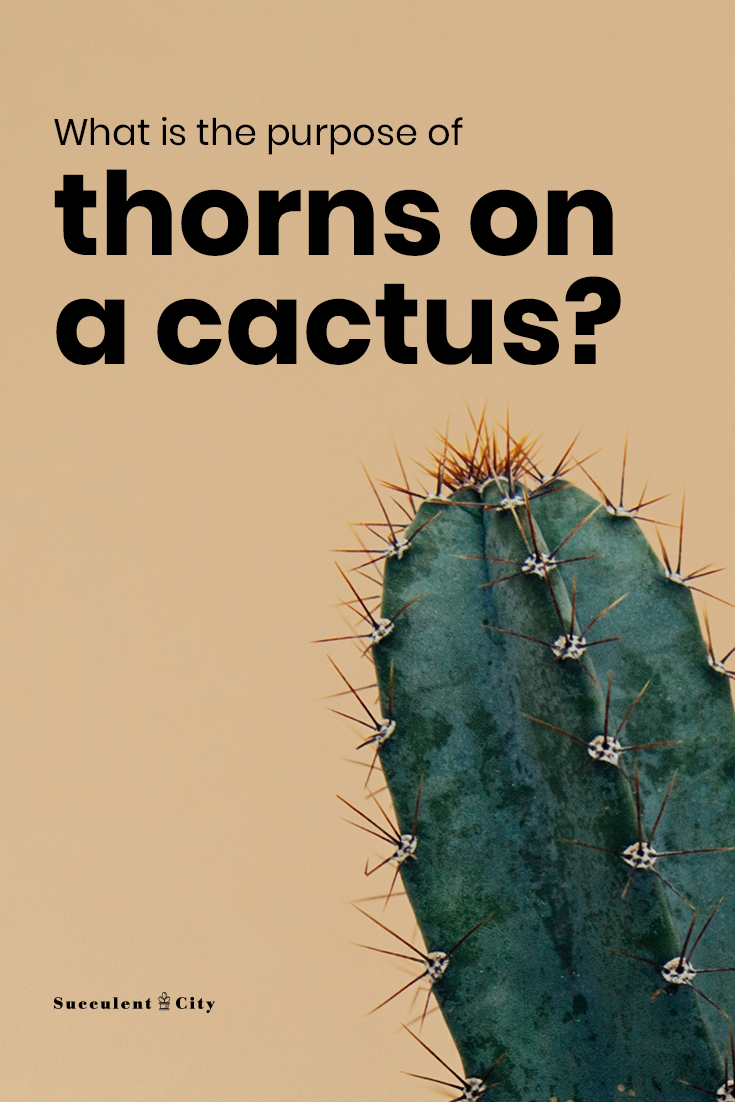