Thanks to the huge awareness of succulents, prickly pear cactus is now (or almost) a household name amongst many houseplants.

The prickly pear cactus is just among thousands of species of the now ubiquitous succulent plants. And it has earned some slack within the cactaceae family in which it falls. It is a popular cactus, no doubt!

Why is the Prickly Pears Cactus chosen amongst the many thousands of other species in the cacti family? Read below to find out!

First off, the very fact that the prickly pears cactus is a succulent has a lot to do with it becoming a much loved plant amongst many. So of course, it’s only natural that we consider some of the popularity triggers in succulents but with a focus on the prickly pear cactus.

In other words, what makes this plant a go-to option for plant lovers and green thumbs alike?

1. The Prickly Pear Cactus is Easy to Propagate

Adding a few plants to your prickly pear cactus collection isn’t a very much demanding process. At least not compared to some other non-succulent houseplants out there.

All you need is to break off a few segments, let them callous and stick them into a well-draining mix. Pretty straightforward, right? Here’s some additional helpful tips to ensure your propagating skills are unparalleled. Our article about how to propagate succulents has been so successful, it’s helped over 20,000 people! Read it here: “How to Propagate Succulents Successfully”.

2. The Prickly Pear Cactus Doesn’t Need ALL of your Attention

Well, you might not be growing a plant just to ignore it. Plus, a plant that craves your presence for proper growth isn’t exactly the one you’ll want to keep if you don’t have the time.

And a prickly pear cactus is the perfect combination of attention- needing and neglect! This cactus will do just fine with the occasional neglect (whether intentional or not). This makes it a nice addition for someone looking to add some plant life in their spaces but doesn’t require all the time in the world to babysit the beautiful cactus.

That’s why you’re probably able to keep it alive when it’s far away from its natural habitat.

The prickly pear cactus can withstand some serious variations in growing conditions. The buck rests with you as the owner to provide just the very essentials and watch the plant beam. It doesn’t matter whether you’re living in some desert or not.

Why wouldn’t such a plant be favored in cultivation?

The prickly pear cacti has a range of colors to flaunt. And it’s not just their segments. The flowers also can be quite a show if you’re nurturing more than one species.

The segments are mainly green but the shades vary a bit. That said, a few species, like the Opuntia Macrocentra, are completely different with purple segments and black spines. 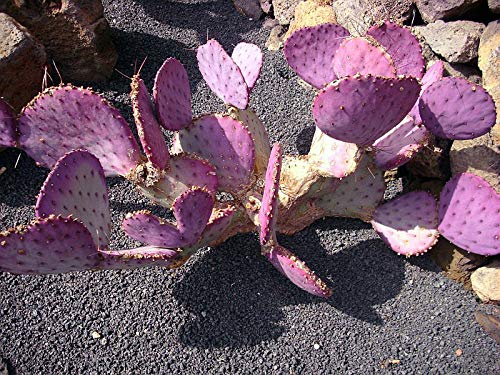 Buy Now on Amazon
Learn More
We earn a commission if you click this link and make a purchase at no additional cost to you.

The flowers have the widest variations of color. There is yellow, orange, pink, red and so on.

Two or more different species are going to do wonders as far as aesthetics are concerned. And everyone loves some variation right!?

The prickly pear cactus is cherished so much as an ornamental plant, it has a whole lot of uses that has made sure it is cultivated extensively especially in its native lands.

Aside from adding beauty to where it is planted, the prickly pear cactus is also used as

These have had a huge influence on its top ranking position among the cacti. No wonder it’s quite popular!

Here, the fruit is the most known to be the edible part. It’s not the only one, though. Not only is the fruit eaten but also The stem segments are also eaten when they’re still young. Maybe not so much when the plant is mature simply because that would hurt, like a lot!

But the fruit is the main source of food on the prickly pear cactus. Also check out some other edible succulents in this article!

You’d expect that the presence of glochids on the fruit will make it unbearable to eat. But, if anything, the fruit is a popular delight across the globe. Here are the different names by which it is referred to…

These are just for generalization purposes. But as you venture into the different parts of the world that regard the cactus fruit as food, and there are many, you’ll find that each one of them has a particular name for the fruit.

Amongst all these countries, Mexico has the most bits of differentiation with just how they serve this fruit as food. Unlike the majority of countries where the fruit is just eaten, the Mexicans use the fruit for making drinks, appetizers, soups, vegetable dishes, desserts, jelly, salads, etc.

Other countries that feast on the fruit are France, Italy, Eritrea, Libya and Greece just to name a few.

Also, it turns out its not only humans who enjoy mouthfuls of the prickly pear cactus. Domestic animals too love to take a bite, especially for drought-stricken areas where the vegetation cover isn’t a worthwhile source of food.

Well, that was a few years back. Presently, it’s not only the animals in drier parts that get to enjoy these cacti. It has been gradually included as forage in ranches and dairy farms.

The fact that it is a cheap feed makes it quite an option for most rural farmers.

Although most of them were just passed down from a generation to another, there are a number of results from researches that stamp the medicinal value of the fruit of this cactus. Here are some of them

There is also anecdotal evidence of the pads being used to relieve chest congestion.

This a reserve of the rural dwellers. It is an age-long practice where the prickly pear cactus is planted on boarders to mark off property.

The plants here double up as a security measure— deterring animals and would-trespassers!

What do you think? Are you grabbing your car keys now to go find yourself a Prickly Pear Cactus? We’re right behind you! 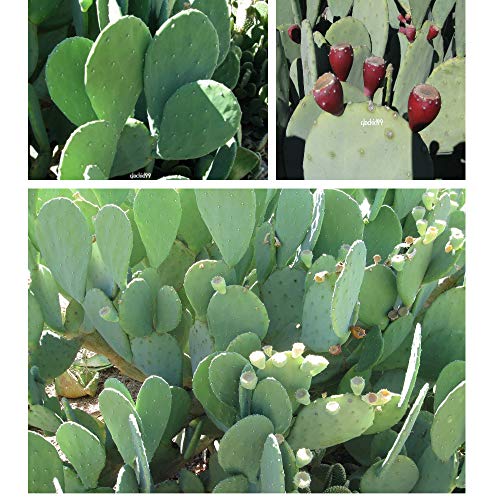 Buy Now on Amazon
Learn More
We earn a commission if you click this link and make a purchase at no additional cost to you.

Do you own one (or more) already? Show it off in our exclusive Facebook Group, Succulent City Plant Lounge, now! We have hundreds of members sharing tips and tricks on how to take care of their succulents and cacti, it’s quite useful actually!

Enjoyed learning about the Prickly Pear Cactus? If so, you’ll really enjoy the ebook about Different Types of Planters. With this ebook, you’ll find yourself more detailed answers that’ll help your succulent grow even better! With thousands of succulent lovers enjoying our ebooks, you don’t want to miss out on what works the best to grow your succulents.

The Gardener's Guide to Succulents: A Handbook of Over 125...
Buy From Amazon
SaleBestseller No. 2

Essential Succulents: The Beginner's Guide
Buy From Amazon
Bestseller No. 3