When we think of succulents, we usually picture small, interesting looking plants perched atop colorful stones or diverse pots. They come in all hues, shapes and sizes, and some actually look like beautiful sea creatures that escaped the underwater wonder of the world otherwise known as Atlantis. Okay maybe not that extravagant but these mostly small, indoor succulent plants bring a sense of vibrancy wherever they are placed and can survive without much of a fuss!

However, have you ever thought of a gigantic, mammoth sized succulent?

How cool would it be to astonish your neighbors with a plant that as big as the tree on their front lawn? Or perhaps a succulent that looks like it belongs as a backdrop on the set of Lion King? (This would be so cool!)

We have narrowed it down to three stunning large succulents that are sure to catch the attention of everyone who sees them, and this is the good kind of attention. If you don’t like large succulents, stonecrops are your best bet!

When looking for an outdoor statement plant, look no further than the Agave Ovatifolia or Whale’s Tongue. This striking perennial succulent is a native to the Nuevo León region in northeastern Mexico. The family name Agave comes from the Greek word ‘agavos’ which means ‘noble’.

This wonderful architectural centerpiece can grow up to 5 feet (1.5 meters) tall and 6 feet (1.8 meters) wide. This evergreen large succulent shows off chunky, broad grey to powdery-blue, cupped leaves that grow in the compact form of a tightly packed rosette. The pointy leaves are adorned with dramatic teeth (thorns) on the outline of the leaves, and the thorns can grow up to 1-inch long. If you already have one of these beauties, measure it for us and see how long they actually are!

After about ten years, the plant reaches maturity and will then be ready to bloom, but only once in its lifetime. Dense clusters of yellow-green flowers grow from a magnificent flowering spike that can get up to 14 feet (4 meters) tall. Love yellow flowers? Check out our article on Succulents with Yellow Flowers for some awe-worthy additions to your garden.

This set-it-and-forget-it type of plant revels in areas with full sun to light shade and does not like to be disturbed. Like other Agave’s, it does not produce offsets but instead reproduces by means of seeds and bulbils. It prefers well-draining soils, and like other succulents, it is deathly allergic to overwatering. The Whale’s Tongue will produce an off-putting smell as soon as root rot starts to set in.

So if you sniff a funky smell around your garden, this might be the reason why. Learn more about root rot here if you’re interested.

A little bit of regular watering during the summer will have it growing bigger in no time, and it is advisable not to water it during the winter. This slow growing plant is extremely cold hardy, can handle frost like a champ, tolerating temperatures of as low as 5C (41F). No need for any ridiculous plant covers like this right?

When starting off as seedlings or bulbils, experts recommend that you plant this large succulent in early summer and provide extra light during the winter to prevent the plant from stretching. Sometimes we recommend using grow lights if your geographical location is very dim during winter months, especially Sweden. Here’s a grow light that we use in the darkest spots of our office.

There are some things to note about the Whale’s Tongue; the sharp thorns can get you and stick to your clothes and it is advised to place it somewhere with minimal foot traffic. Also, it does have an irritating sap that can be hazardous to children and pets. The theatrical Agave Ovatifolia looks spectacular in an eclectic patio container or as the focal point of a desert garden landscape.

If you get the chance to visit the Karoo Desert National Botanical Gardens in South Africa, you will not miss seeing a bunch of tall trees that look like forks with broccoli at the top. This striking plant stands tall, overlooking the Northern Cape Richtersveld region in South Africa and at the border with Namibia. Allow me to introduce you to the regal Aloidendron Dichotomum or Quiver Tree— formerly known as Aloe Dichotoma.

This perennial succulent is related to the aloe and had its genus changed in 2013 to aloidendron which is a combination of aloe and dendron. The epithet ‘dichotomum’ points to the way the stem of the plant forks midway into two equal branches. It got the name ‘Quiver Tree’ from the indigenous Afrikaans people who call it ‘Kokerboom’ referring to how they would hollow out the tubular branches to make quivers for their arrows.

There are three related species of this outstanding large succulent that all live in the same area and have been rated under the IUCN Red List of Threatened Species:

The numbers of these splendid creatures have dwindled because of climatic conditions, plant collectors, mining as well as goats and sheep eating seedlings as they are herded in close proximity to the large succulent.

Check out these additional brag-worthy 8 Rare Succulents to add to your collection!

The Quiver tree has thick, dark green leaves that grow in the shape of a rosette at the tips of stumpy tree branches. The leaves are curved and taper gradually, giving the illusion of a crown, growing as high as 6 meters up in the air. The branches of the Quiver Tree are covered in a white powder that helps to reflect off the sun’s heat. The plant has three water reservoirs – the fleshy leaves, the swollen fibrous stem and the roots.

The Quiver Tree develops an inflorescence that grows in an upright manner at the top of the leaf rosettes. The plant bears racemes that grow to 150 mm long that later mature to produce up to 30 bright, yellow flowers at a time. The plant tends to bloom in late September. After blossoming, paper-like seeds burst open from spherical capsules and they are often pollinated by birds, bees, ants and the wind.

The Aloidendron Dichotomum can only grow from seeds and the best time to plant them is between March and April. Potting of seedlings can be done once they reach 30 – 50 mm in length or when they are about 3 years old. Their architectural shape and distinct look have made the Aloidendron Dichotomum a well sought after plant, especially in South African gardens and drive ways. Large, potted Quiver Trees make gorgeous statement plants when placed at entrances, courtyards and patios.

Hailed as the ‘Defining icon of African bush land’, the Adansonia digitata, or African Baobab, holds the rights to be called the largest succulent plant in the world. Also known as ‘The Tree of life’, this mammoth beauty can grow between 5 to 30 meters (16 to 98 ft) tall with a trunk diameter growing between 7 and 14 meters (23 to 46 ft). The baobab’s growth rate is determined by rainfall and ground water and has been known to store up to 120,000 liters of water in the trunk.

The scientific name Adansonia digitata is derived from the French explorer and botanist Michael Adanson, who studied the tree in 1749 in Senegal. Digitata refers to how the compound leaves of the plant (usually five to seven) are shaped like the digits on the hand. There are nine official species of the baobab tree, with 6 being natives of the island of Madagascar, 1 from Australia and 2 in Africa and Arabia. The Adansonia digitata has its origins in North Eastern, Western, Central and Southern Africa as well as Oman and Yemen in the Arabian Peninsula and the Penang district of Malaysia.

All baobab trees are deciduous, which means they annually shed their leaves during the dry seasons, remaining leafless for 9 months in a year. They look like a tree that has been planted upside down, with the thick, wide branches spreading out on top of the tree like roots that were meant to be in the ground. The African baobab has a shiny and smooth trunk and the roots can be taller than the tree itself.

With all this talk about these African- native succulents, check out our article on additional 8 Popular Succulents from Africa. You’ll be surprised how many of them are common household plants!

The Adansonia digitata produces flowers once a year at the beginning of the rainy season, and will bloom about four weeks later. The flowers are significantly huge, white and heavy, drooping down like a pendulum from long stalks attached to branches. Larger, older baobabs can grow hundreds of flowers, but the flowers only bloom for one night before they rot and die. The flowers have 5 leathery petals with hair-like structures on the inside. After blooming, the flowers tend to have a putrid smell.

The African Baobab gives off fruits that are shaped like an oblong guard and hang down like the flowers, giving the tree the local name ‘dead-rat-tree’. The fruits have a velvety shell and can weigh up to 1.5 kg. Mostly eaten in Africa, the fruit has a tart, acidic, citrus flavor and is crammed with healthy nutrients such as vitamin C, potassium, carbohydrates and phosphorus. Monkeys find the fruit hard to resist, giving the succulent its other name, ‘monkey-bread-tree’. In Angola, the fruit is boiled, dried then used as a base for an ice cream called gelado de múcua.

Fruits, yes! Some succulents are edible believe it or not. Check out which succulents to add to your next grocery list in our article, here.

Baobabs are ninja plants because they can tolerate the heat, flourish on poor soils and survive drought. They prefer well-draining soil, but potted plants can do well in cactus soil mix. You can order seeds, cuttings or even young plants online and give your neighbors something to really talk about. If you really want to get into it, literally, you can visit the Big Baobab Bar in South Africa and have a drink inside a 6000-year-old Adansonia digitata!

There you have it— the big, bigger, and biggest of the succulent world! The greatest thing about our modern tech world is that you can find seeds and young plants of all three succulents online. So if you were thinking of changing things up a little in your garden, why not try something big!

Expand you succulent- knowledge even more! Check out some additional articles from Succulent City like How Long Do Succulents Live, How to Propagate your Succulents Successfully, or 9 Rare Cacti that are Hard to Find.

Do you own any of these amazing, large succulents? We want to see! Share your photos in our exclusive Facebook Group, Succulent City Plant Lounge, today!

Enjoyed learning about 3 Popular Large Succulents You Don’t Have? If so, you’ll really enjoy the ebook about Rare Succulents You Wish You Knew About. With this ebook, you’ll find yourself more detailed answers that’ll help your succulent grow even better! With thousands of succulent lovers enjoying our ebooks, you don’t want to miss out on what works the best to grow your succulents. 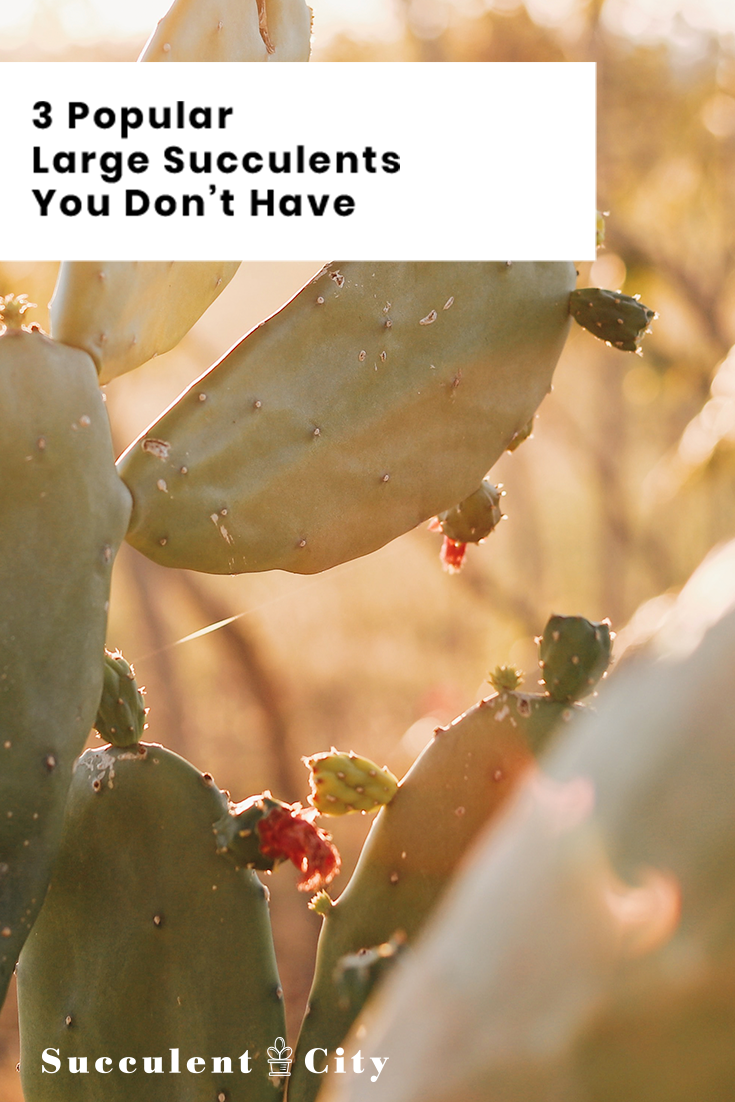